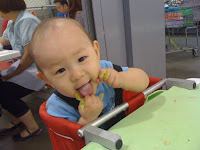 Yesterday the Little Guy and I went to Costco: I put him in his Phil & Ted's MeToo! Travel Highchair

and he sat quietly chomping on his food while I had my lunch. He and his high chair attracted a lot of admirers; I guess Phil & Ted's doesn't have a distributor in Taiwan. People thought the chair was neat and handy, and they thought the Little Guy was cute and well-behaved. One woman came up to me and we had a nice chat. "People told me not to hold my baby too much, but you should hold your baby close now, because before you know it, they'll be 33." (Guess how old her son is now?).
I told her I shared the same philosophy, and she replied that she could tell we were strongly attached, since he was sitting so peacefully in his chair while I ate. "I can see he feels secure," she said. It's so nice to receive support of my parenting style.
Posted by B at 10:26 PM 1 comments

What happens when you leave your comfort zone for the unfamiliar?

I am an American living in Taipei, learning not just a new culture and language, but also seeing my home country from an overseas lens.